In a wide-ranging interview with the Nikkei Asian Review, she said she would “find out more” about forces that triggered the exodus of more than 410,000 mainly stateless Muslim Rohingya into neighboring Bangladesh, and reiterated her readiness to start the verification process for the return of some refugees at “any time.”

Despite her offer to facilitate visits by Myanmar’s diplomatic community to affected areas of northern Rakhine, she again ruled out allowing into the country the fact finding mission proposed earlier this year by the U.N. Human Rights Council.

Suu Kyi, who is also foreign minister, also addressed investor concerns that the Rakhine crisis could affect Myanmar’s economic outlook, saying her government was stepping up economic reform — particularly in agriculture and infrastructure development. Such reforms, she said, were essential to alleviate the kind of poverty that can breed radicalization.

A day after her televised speech to domestic and international audiences about the situation in western Rakhine — and ahead of an address by one of Myanmar’s two vice presidents to the United Nations General Assembly in New York — she also tackled international criticism over a brutal military campaign that has razed more than 200 villages in Rakhine and driven entire Rohingya communities into Bangladesh. The exodus was triggered by the military’s ferocious response to attacks by a Rohingya militant group on more than 30 police and military facilities on Aug. 25. About 12 security personnel and nearly 80 insurgents from the Arakan Rohingya Salvation Army were killed in the attacks, although at least 300 more ARSA suspects were killed in the military’s ensuing “clearance operations.”

Since then, former supporters — including government leaders, international organizations and the United Nations — have accused Suu Kyi of presiding over ethnic cleansing policies, while critics have claimed she is indifferent or unwilling to halt the military’s campaign.

“Actually, nothing is surprising, because opinions change and world opinions change like any other opinion,” she said. “Countries that have been through a transition themselves are much more understanding than those which have never gone through such a process,” she added, referring to the range of reactions from Asian and Western countries.

“Domestically, yes, we do have an opposition force, which is how it should be in any democratic country … it means we are open to criticism and debate.”

Asked about her claim in her Sept. 19 speech that military operations had ceased in northern Rakhine from Sept 5, despite mass movement of refugees in the weeks since, she said her government needed to find out more about the circumstances behind the continuing outflow of refugees and the burning of villages.

Her remarks reinforced reports that mob violence by local Rakhine communities and paramilitary groups had continued to drive Rohingya communities out. They also hinted at a new search for evidence about the perpetrators of the attacks.

“We would like to know, because the largest number seems to have left over the past couple of weeks. [Military operations] had quietened down after Sept. 5, so I wondered why people started leaving after [then] … It could be they were afraid there might be reprisals, it could be for other reasons. I am genuinely interested because if we want to remedy the situation, we’ve got to find out why — why all the problems started in the first place,” she said.

“If you’re going to try to work in accordance with the rule of law, you have to have proper evidence, acceptable evidence — not just hearsay, or not just something that might be considered evidence. It has to be acceptable in a court of law.”

“I do not like to use the word ‘investigation’ because it looks as though we are going to grill people and ask them why … But we do want to … find out why now, after things have quieted down, the displacement began in real earnest…”

In the interview, Suu Kyi addressed various issues including her willingness to facilitate the return of refugees to Myanmar if they so wished.

On the return of refugees: 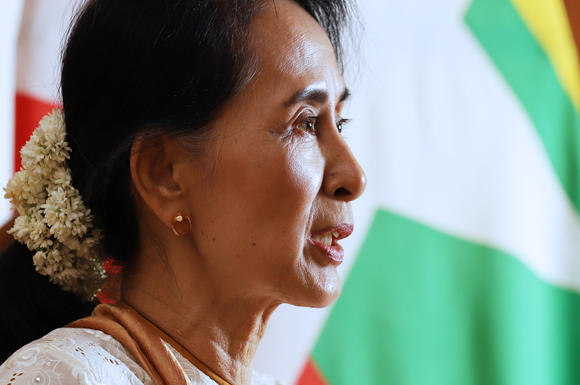 Aung San Suu Kyi told the Nikkei Asian Review on Wednesday her government would facilitate the return of refugees who fled to Bangladesh during the military crackdown in Rakhine. (Photo by Shinya Sawai)

On her assertion that 50% of villages are intact in affected areas of northern Rakhine State:

“I’m just talking about the Rakhine villages. Although 30% of the Muslim villages were as they were before — no problems there, all quite calm, and everything carrying on as usual. But people overlook these villages; they concentrate on the ones where the conflicts have taken place and from where the exodus started. The 50% I am talking about are ones which were left untouched — no damage, nobody leaving; just carrying on as normal.”

On implementation of the report by an advisory commission chaired by former U.N. Secretary General Kofi Annan, released just before the Aug. 25 ARSA attacks:

“It is a great and admirable report. [Kofi Annan] tried to be as fair and balanced as possible. Some of the facts in the report were not quite accurate, but we pointed that out to the commission and they have agreed that some of the facts needed to be corrected.”

On foreign policy priorities, and whether condemnation by Western governments could lead to further expansion of Myanmar’s relationship with China:

“We will maintain our policy of trying to establish friendly relations with all countries all over the world. Of course, we are always aware that Myanmar is not just Rakhine. I think ASEAN [the Association of Southeast Asian Nations] as a regional force has done very, very well … We are happy to be part of ASEAN, and we hope we will be able to contribute more; of course, so far we have been among the weaker members of ASEAN. I suppose our representative at the United Nations will be taking part in [an informal ASEAN meeting on Myanmar at the General Assembly in New York]. We have no plans to convene [another special meeting to brief countries on the Rakhine State situation] so far.”

“Of course, we have to be aware of the possibility that there might be some impact. But I don’t think we are unduly worried … It would be foolish not to take into consideration the fact that these developments could impact investment possibilities … We have to work on everything at the same time — that’s government. Those who are interested in the Rakhine situation from the outside will only focus on the Rakhine situation. But we have to carry on with the rest of the country — including the economy, health, education, development, peace process, everything. And we keep our eyes open to make sure that we are doing the best in every possible sector.”

“It’s natural that they should be concerned about it. But they should step back a little and look at it coolly. They will be able to see that one of the reasons why we have problems like these is because of underdevelopment rather because of investments. So investments would actually help to make the situation better.”

“We are concentrating a lot on basic infrastructure, which to people from Australia and Japan might seem almost laughable, like roads and electricity. But it is very important for potential investors that there should be basic infrastructure. And our infrastructure sector has gathered strength in recent years. This should be an incentive for more investment. There are new opportunities, developments which would make investment a lot easier, practically speaking. There are businesses interested in investing, but not interested in building roads, for example. But as the roads are bad … that makes it so much simpler. Construction work has gone very well over the last 1.5 years. There’s massive demand, but I think at the moment, the funding is adequate for what we are able to do. With all the funding in the world, you can’t do everything at once.”

On concerns about tourism and impact of the Rakhine crisis recent travel advisories by some mainly Western countries:

“It depends from where we expect the great majority of our tourists. I think our minister of tourism is very much aware of this, and where the great numbers of our tourists are coming from. At the moment we are getting the greater number from the East rather than the West. Domestic tourism is a little different from the way in which international tourists proceed — because a lot of domestic tourism is due to pilgrimages to religious sites — though more people are now going to the beaches.”

“I understand the concern about the timeframe. But that’s negotiable. Of course, these regulations are necessary; but I think if the timeframe needs to be adjusted, I’m sure it can be adjusted. We are thinking about it because many people have voiced their concerns with regard to the timeframe, and I’m sure the central bank is very well aware of that.”