For determined gourmets, part of the appeal of Haseshige is its improbability – its exceedingly drab location in a no man’s land between Tokyo and Yokohama; its unexpectedly stylish yet cosy surroundings, and above all, its excellent food and reasonable prices.

We were reluctantly coaxed to undertake the trek from central Tokyo to the distant suburb of Higashi Hakuraku by an enthusiastic friend who had been a Haseshige regular for years. The packed commuter Toyoko line train ride from Tokyo hardly inspired confidence. Emerging from the station onto the main drag, which resembled a highway to an industrial zone, we wondered if we had come to the wrong place. But it all began making sense after an 8-minute walk and a right-hand turn into a small street revealed the intriguing façade of Haseshige with its grey slate tiles and stylized portholes. 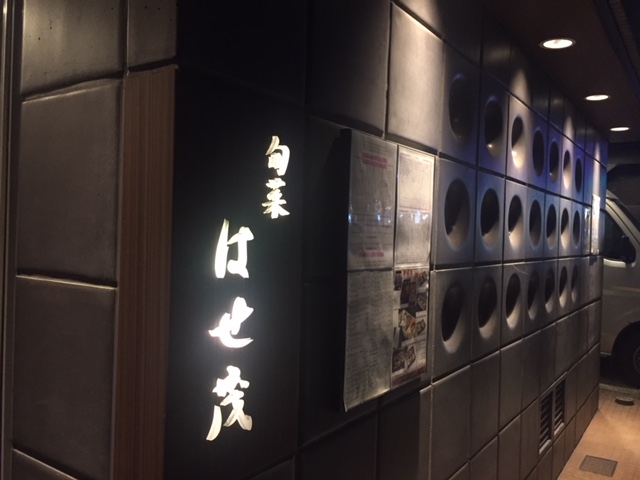 Haseshige’s façade, an unexpected sight on a Kanagawa suburban street.

Enter the cosy interior, with its 8-seat wooden counter, gleaming kitchen and comfortable cream leather chairs, and you feel instantly at home. 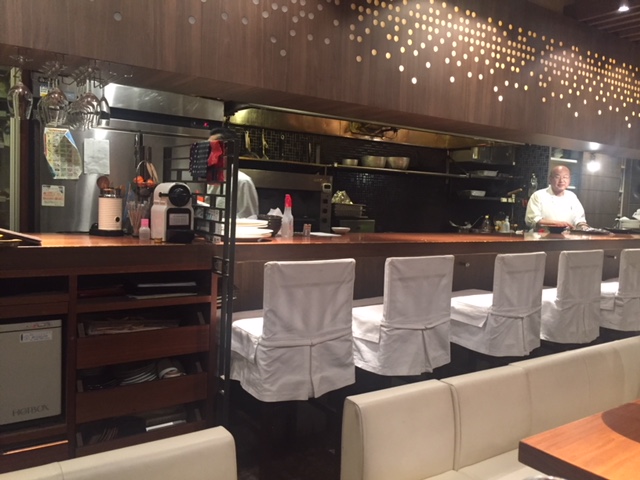 This is the creation of Shigeki Hasegawa, who founded his eponymous restaurant nearly 30 years ago. Despite its location, the restaurant has developed a loyal following and a successful business making high-quality bentos. But evenings behind the counter top, cooking for and chatting with customers is clearly what pleases the low-key Shige. Together with his flamboyant architect wife, Sachiko, he has built a modest local restaurant into a gourmet oasis in a nondescript suburb. Shige, as he is known, always wanted to be a kaiseki chef from the time he was a child, and after working in various establishments including an upscale Japanese restaurant in the Kanagawa coastal town of Yokosuka, he decided to open his own place. After years of developing his hybrid techniques of traditional Japanese food concepts and western touches, Sachiko’s flair for design added pizazz to Haseshige’s magic.

Shige works behind the counter with a small crew of kitchen staff and a helpful young waiter. The atmosphere is relaxed and friendly, enhanced by soft jazz tracks and other background music. Yet the team is totally serious about the food and presentation.

Once we were comfortably seated and had exchanged a few pleasantries with the chef, the omakase (chef’s choice) course menu began rolling out with an exquisite creation of anago (sea eel) and aubergine with negi, or green onion, on a brilliant scarlet plate. 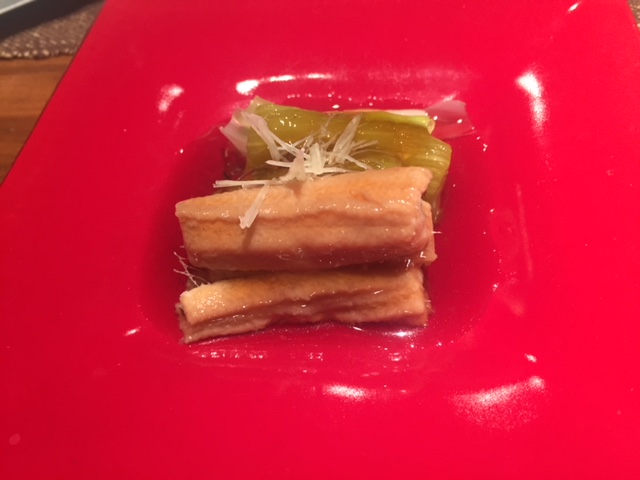 The hassun – or seasonal appetizer course – was a feast for the eyes as well as the stomach, presented like a jewel-studded platter that featured a savory, light cauliflower and uni (sea urchin) mousse, a single luscious baby tomato on a sliver of hard tofu, firefly squid and emerald green fava beans. 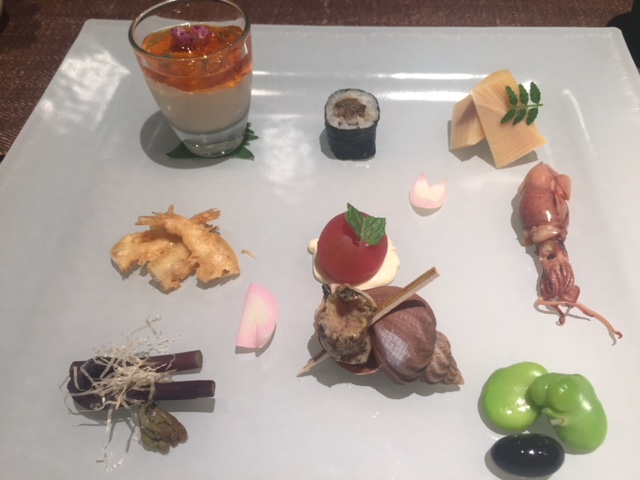 A striking hassun, or seasonal appetizers, feeds the eyes as well as the stomach. 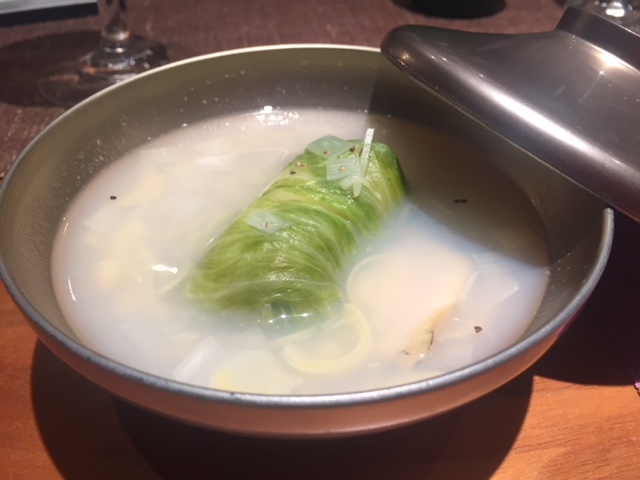 Hamaguri clam and lettuce roll in a delicate soup made of sake lees.

A meat course of perfectly cooked kurobuta or black pork fillet – with an alternative for the pescatarian in our group of fugu or blowfish fillet — combined western and Japanese culinary ideas, with a fine, savory gravy and European-style stacked vegetables. 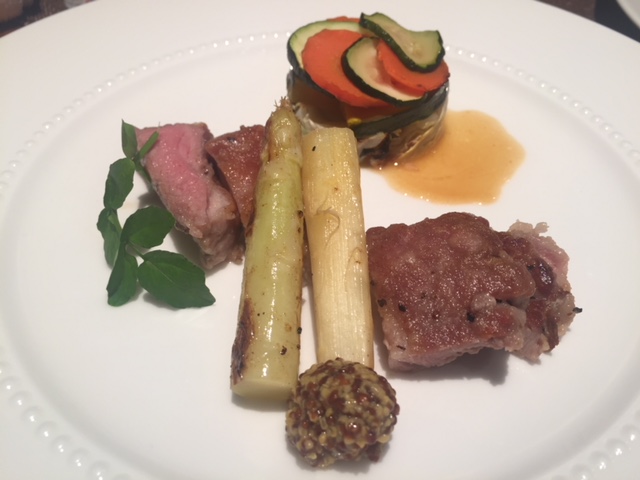 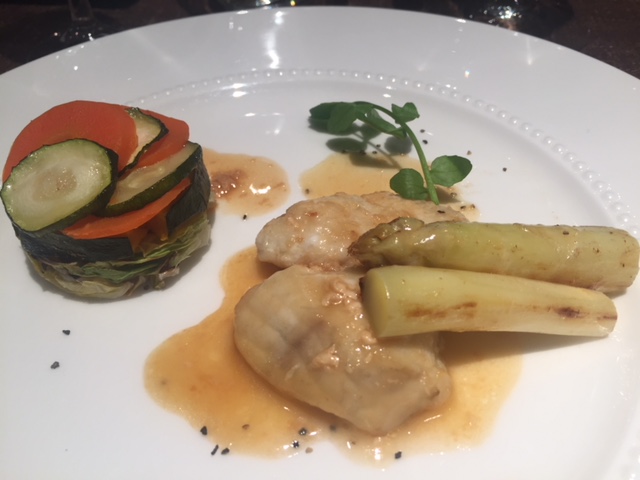 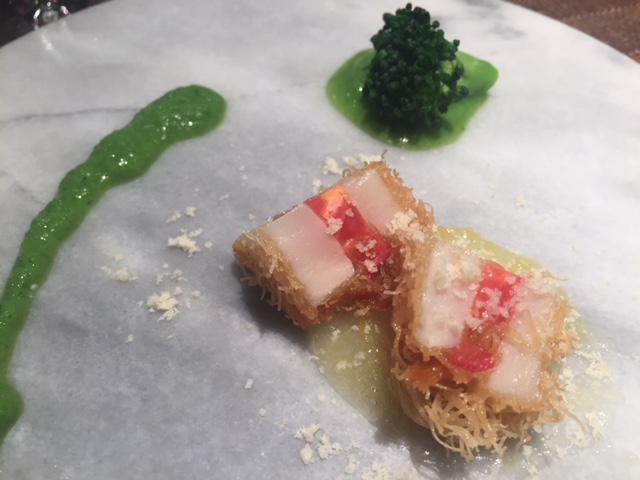 A juicy Hokkaido scallop with lemon and tomato sauce and a broccoli sauce on the side.

Yet, like all good chefs, Shige understands when to let excellent ingredients stand on their own merits. A dish of steamed zuwaigani or snowcrab, legs came on stunning dishes with just a lemon wedge; the sashimi course was a simple but superbly fresh selection of otoro maguro (prized fatty tuna), hirame (flounder) and shima-aji (striped horse mackerel). 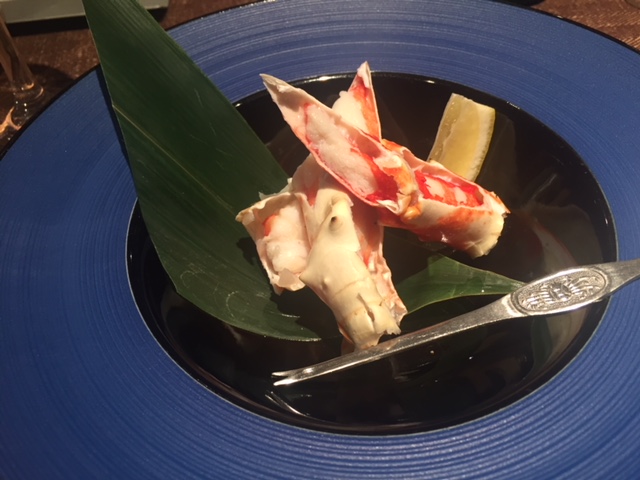 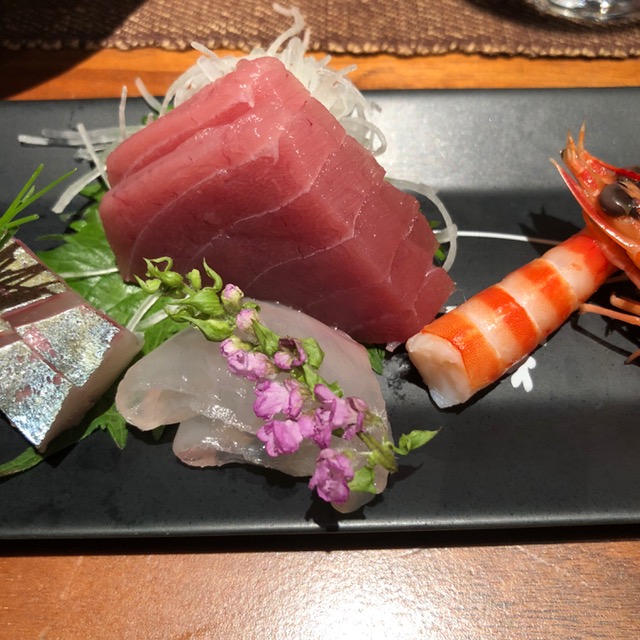 Just when we thought we couldn’t really eat much more, out came the rice course, a subtle yet hearty donabe gohan (claypot rice) dish smothered in new bamboo shoots. 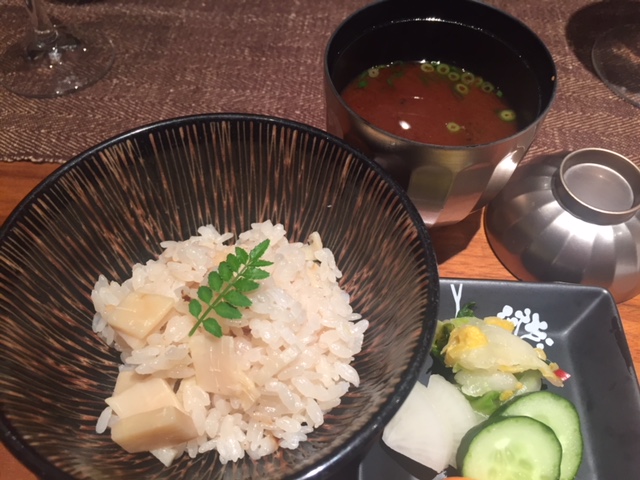 To complete the feast came a two-part dessert of something resembling a burnt orange crème brulée and a lemony stuffed crêpe. 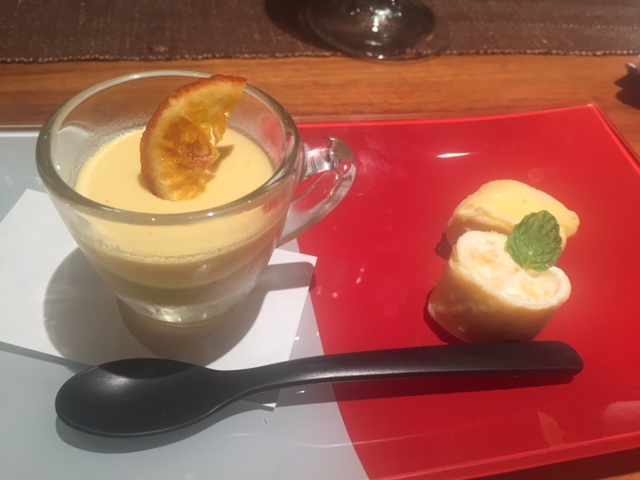 The Y7,500 course spanned 10 dishes, most of them combining traditional Japanese roots with modern twists. But for those with smaller appetites or for late night snacking, there’s a mini-kaiseki course for Y4,500 and reasonably priced ? la carte choices.

We lingered and enjoyed banter with Sachiko and Shige, who were just getting into their stride by the time we waddled back towards the station. The real kick the pair seem to get from running Haseshige is the inevitable expressions of surprise and delight among first-timers when they quickly realize that the schlepp to Higashi Hakuraku and the reasonable cost of the ‘chef’s selection’ feast makes it all worthwhile.

Closed : Monday, National Holidays (Open on Monday if it is a national holiday)