{1st Photo Caption: Razali Ibrahim, third from right, the incumbent of Muar district, poses with villagers of Kampung Sungai Balang on May 2. (Photo by CK Tan)}

KUALA LUMPUR/MUAR, Malaysia — There is a frenzied atmosphere in the final days of campaigning ahead of Malaysia’s May 9 national polls — not least in Johor state, a long-time stronghold of the ruling Barisan Nasional, or National Front coalition.

What looks like a youth wave is suddenly putting Prime Minister Najib Razak on the back foot in this populous and politically crucial state. “The young, they want to be part of the history that will ensure young parliamentarians,” said Syed Saddiq Abdul Rahman, 25, a candidate in the district of Muar for the opposition Pakatan Harapan, or Alliance of Hope, led by former Prime Minister Mahathir Mohamad.

In the 11-day campaign period, interest in the youth vote has dominated social media, while the main parties have highlighted their youth organizations wings. The opposition has focused on recruiting young candidates. “Young people want Malaysia to be respected again, to institute reforms. Many are suffering from the high cost of living. The graduates, they complain about low pay. Some of them are jobless,” Saddiq, one of the youngest parliamentary candidates in the national election, told the Nikkei Asian Review.

Saddiq is viewed as the face of a new generation of aspiring politicians determined to challenge the old guard and end “money politics.” Of nearly 15 million registered voters in Malaysia, 41% are below the age of 40 — more than double the number of voters over 60.

Muar, known for its furniture-making industries, represents a microcosm of the key battleground state of Johor, the second most populous among Malaysia’s 13 states and three federal territories.

Those living in Johor complain about rising living costs, caused in part by higher property prices due to the building of high-end housing estates and condominiums. Chinese investors have helped fuel the construction boom, which has played into Mahathir’s warnings of growing Chinese influence in the state and which taps into long-simmering tensions between the country’s majority Malay and minority ethnic Chinese communities.

In the last parliament, the ruling coalition held 20 of Johor’s 26 seats, while it had 38 of 56 seats in the state assembly. But a survey released on May 2 by the independent Merdeka Center showed that the opposition was gaining strength in Johor among ethnic Malays, who form the backbone of the ruling coalition, while maintaining support among ethnic Chinese voters. “It is going to be a very close contest,” said Ibrahim Suffian, Merdeka’s executive director. 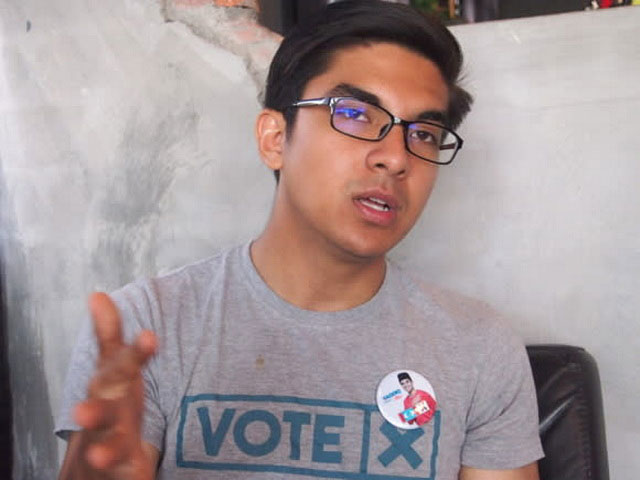 Opposition candidate Syed Saddiq Abdul Rahman, is one of the youngest candidate in the May 9 election. (Photo by CK Tan)

Saddiq is one of an unprecedented number of young candidates that the 92-year-old Mahathir has recruited to the opposition. Coming from a modest family background, Saddiq gave up a post-graduate scholarship to University of Oxford last year to enter politics. One benefit of having young candidates is their energy. Saddiq campaigns up to 20 hours a day, visiting mosques and knocking on voters’ doors. “There are 50,853 voters in Muar, I’ve already personally met 20,000. I want to meet all, but at least aim to shake hands with 30,000 by election day,” he said.

But Saddiq faces a tough opponent in Razali Ibrahim, a veteran ruling party politician who has represented the Muar area since 2004, although he only narrowly won re-election in 2013 with 52% of the vote.

On a campaign visit to Kampung Sungai Balang, a fishing village and palm plantation of about 300 inhabitants outside Muar, Razali was greeted with a barbecue and a near life-size model at the village jetty of a sailing boat festooned with the blue-and-white flags of the National Front coalition.

The 47-year-old Razali can also lay claim to the country’s young voters since he was a former leader of the youth wing of the United Malays National Organization, the leading party in the governing coalition. “I was one of the youngest candidates to run in 2004,” he said. “I am saying I represent the young, and can understand, help train them.”

As deputy minister in charge of the state plantation agency Felda, he can also boast of his ability to deliver benefits to his constituency. Villagers say Razali had served them well. He raised funds to build the village jetty in 2015 that includes a space for small retail outlets.

“I tell my constituents I will increase their purchasing power by increasing their income through government development programs,” Razali said.

Saddiq acknowledges that as a neophyte candidate he cannot claim the same experience as Razali, but he believes that he can deliver improved living standards by promoting government reform and transparency.

The Alliance of Hope promises to introduce open tenders for all government projects and allow parliamentary committees to make key government appointments. “If you don’t have a reformed Malaysia where the media or the anti-graft body is independent and free, it will be very difficult for us to create a Malaysian vision for all,” said Saddiq.

One potential handicap for Saddiq is that he lacks Razali’s financial clout in mounting a lavish election campaign. But Saddiq said he can overcome this obstacle by relying on volunteers who conduct a vibrant social media campaign and telephone thousands of people daily to canvass for votes. “We win or die as a team,” he said.

Saddiq, for example, has posted a video clip on Facebook about his father, who commutes daily from Johor to Singapore to work. The message is that more better-paying jobs exist in Singapore than in Malaysia, with the result that 400,000 Malaysians make a daily trek to the city-state.

The election’s emphasis on youth is also seen in another election contest in Kuala Lumpur. Fahmi Fadzil, 37, is hoping to succeed Nurul Izzah Anwar, the daughter of jailed opposition leader Anwar Ibrahim, as the representative for the inner-city constituency of Lembah Pantai — a mixed area of high-rise council blocks and luxury housing.

A chemical engineering graduate, Fahmi became a theatrical performer and writer before entering politics as a communications officer for the opposition. Fahmi knows he has tough race to replace Nuril Izzah, 37, who was narrowly re-elected in 2013 with 51% of the vote and who has decided this year to contest a constituency in the opposition stronghold of Penang instead.

The government recently gerrymandered the electoral boundaries of Lembah Pantai to include nearly 8,000 civil servants, who normally vote for the government. Fahmi still expresses confidence he can win. “Malaysians know they need a change,” he said.

Political analysts are divided about whether young candidates have what it takes to win. But if the social media buzz is any indication, candidates such as Saddiq and Fahmi have already changed the political landscape.