{1st Photo Caption: A man wearing mask is seen in Bangkok on March 5. The Asia and Pacific region could suffer a quarterly decline in working hours of 10% in the April-June period. (Photo by Akira Kodaka)}

BANGKOK — The COVID-19 pandemic is inflicting a “triple shock” on young people globally, particularly women, and is having a harsh impact on Asia’s job market, according to new research by the International Labour Organization.

In its latest analysis on the effect of the pandemic on the global labor market, the ILO said more than one-in-six people aged 18-29 had stopped working since the onset of the pandemic, while those who remain employed had seen their working hours cut by 23%.

The outbreak is destroying youth prospects for employment, but also “disrupting education and training, and placing major obstacles in the way of those seeking to enter the labor market or to move between jobs,” the labor body noted.

The youth unemployment rate before the pandemic, at just under 14%, or 67 million young women and men, was already higher worldwide than for any other age group. It is now rising sharply, from 17% in February, according to the latest edition of “ILO Monitor: COVID-19 and the World of Work,” published on Wednesday.

As of early May, there were around 267 million young people (15-24 years old) around the world categorized as not in employment, education or training. Among those who are employed, almost 77%, or 328 million, were in informal jobs, the report said. This compares with around 60% of workers aged 25 and above.

Informal employment tends to be characterized by poorer working conditions, along with weaker trade union representation and protection, the report noted. Informal workers are “also more likely to be in forms of work that leave them vulnerable, such as low-paid occupations, informal sector work, or as migrant workers.”

In its assessment of the pandemic’s impact on employment worldwide, the ILO found that the Asia and Pacific region suffered more than twice the amount of lost working hours — a measure used to estimate job losses — versus the global average in the first quarter of 2020.

Asia and the Pacific reported a 6.5% decline in total hours worked, equivalent to 135 million jobs, against an overall fall of just 3% or less in all other major regions.

The trends are closely related to the timing of outbreaks and the implementation of physical distancing measures across the world, the report noted. In particular, global patterns in lost working hours in the first quarter were largely driven by the “exceptional impact of the COVID-19 crisis in China during that quarter,” the ILO said. 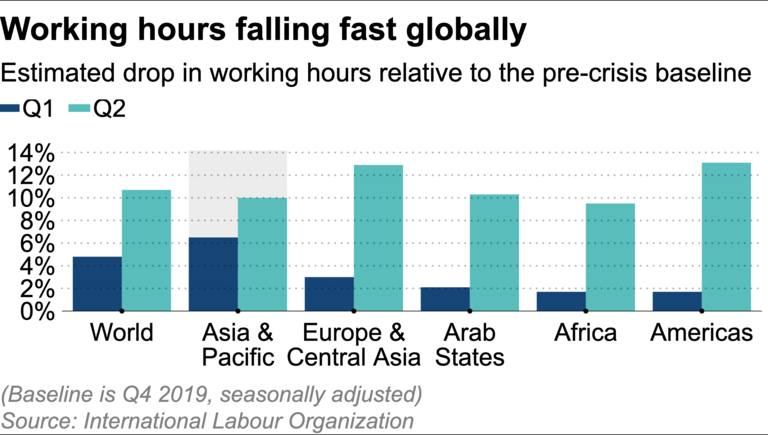 The picture is far bleaker for the second quarter.

The latest ILO estimates project a decline in working hours worldwide of around 10.7% compared with the last quarter of 2019, equivalent to 305 million full-time jobs (assuming a 48-hour workweek), with far more losses in part-time jobs. From a regional perspective, the Americas (13.1%) and Europe and Central Asia (12.9%) are likely to see the largest losses in hours worked in the quarter, while Asia and the Pacific could suffer a quarterly decline in working hours of 10%.

Among the most vulnerable, the COVID-19 economic crisis is hitting young people, especially women, harder and faster than any other group, warned ILO Director-General Guy Ryder. “If we do not take significant and immediate action to improve their situation, the legacy of the virus could be with us for decades… [and] make it much more difficult to rebuild a better, post-COVID economy,” he said in a statement accompanying the report.

To support youth, the Geneva-based organization called for urgent, large-scale and targeted policy responses, including broad-based employment and training guarantee programs in developed countries, and employment-intensive schemes and guarantees in low- and middle-income economies.

In related research, the ILO examined safety measures that countries should put in place to encourage people to return to work. It said that rigorous testing and tracing of COVID-19 infections help minimize labor market disruption, and achieve “substantially smaller social disruptions than confinement and lockdown measures.”

Countries with strong testing and tracing had reduced the average fall in working hours by as much as 50%, it noted, for three reasons: first, testing and tracing reduces reliance on strict confinement measures; second, it “promotes public confidence, and so encourages consumption and supports employment”; and third, it “helps minimize operational disruption at the workplace.”

In addition, the report added, testing and tracing can itself create new jobs, even if temporary, which can be targeted toward youth and other priority groups.