{1st Photo Caption: Members of the media visit a village in northern Rakhine state during a government-organized tour on Aug. 30. (Photo by Thurein Hla Htway)}

SITTWE, Myanmar — Disclosures that senior United Nations officials were warned earlier this year by experts — including their own staff — about a looming crisis over military suppression of the Rohingya Muslim minority in Myanmar’s Rakhine state have sparked what one aid official called a “new blame game” in Myanmar.

In a flurry of finger-pointing, international organizations, governments and media are seeking to place blame for the West’s chaotic response to a conflagration that has driven more than 600,000 refugees from Myanmar into Bangladesh since last October, and caught international policy makers and aid organizations off guard.

At issue is mounting evidence of what U.N. top officials themselves have described as “ethnic cleansing policies” conducted by Myanmar’s security forces in northern Rakhine state, where the bulk of the state’s mainly Rohingya Muslim population resided.

The military’s brutal response to two waves of attacks by Islamic militants since last October has reduced the state’s Muslim population by nearly 50% from an estimated 1.1 million in late 2016.

In the most recent development, the leaking this week of an internal paper commissioned by the U.N.’s country head in Myanmar, warning of an imminent human rights crisis in Rakhine, highlighted media allegations that the paper was shelved by the U.N.’s resident representative in Myanmar, Renata Lok-Dessallien.

Lok-Dessallien had initially commissioned the paper, submitted in May — nearly four months before attacks by Muslim militants on Aug. 25 triggered the recent military crackdown — from independent Myanmar expert Richard Horsey, amid growing debate about the U.N.’s programs and policies in Rakhine.

The paper echoed charges by some critics that the U.N. had mistakenly prioritized building good relations with Myanmar’s government under de facto leader Aung San Suu Kyi — who took the helm as state counselor in March 2016 — over serious human rights considerations in Rakhine and other ethnic states, as well as on issues such as media freedom.

With chilling prescience, the paper predicted a “serious deterioration” in security in Rakhine in a matter of months, citing indications that Muslim militants were recruiting in northern Rakhine and could mount further attacks. Warning that security forces would be “heavy-handed and indiscriminate” in their response, the paper said there should be “no silence on human rights,” and urged the U.N. to undertake “serious contingency planning” for a possible military crackdown and displacement of communities — as happened in previous waves of violence in 2012 and 2013, and more recently in October last year. 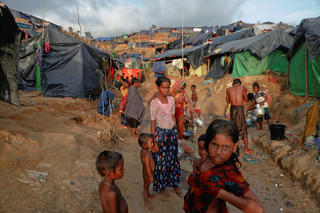 Rohingya refugees gather at a water place at a camp for those who recently fled from Myanmar, near Cox’s Bazar, Bangladesh October 5, 2017.© Reuters

The paper, entitled “The Role of the United Nations in Rakhine State,” made 16 recommendations including the need for new staff roles in Myanmar, with one fully focused on Rakhine, and more direct and “frank” communications with the government. It also said the U.N. “must be ready to quickly confront any serious deterioration in the situation such as could be triggered, for example, by any new attack on the security forces.” It urged U.N. headquarters in New York to immediately identify ways to “improve overall coherence in the U.N.’s system approach.”

The disclosure that the paper had been shelved by Lok-Dessallien was reported by The Guardian on Friday. Several U.N. officials confirmed to the Nikkei Asian Review that the paper had not been circulated to U.N. agencies in Myanmar.

The report’s author, Horsey told the Nikkei Asian Review: “There is probably much that the U.N. in Yangon and at its headquarters can learn from how it handled the situation in Rakhine over the last several years. But now is not the time for recriminations. It is the time to focus on getting vital humanitarian access to northern Rakhine for the U.N. and its international NGO partners, and supporting its response to the refugee crisis in Bangladesh — as well as its broader political role in Rakhine.”

The allegations also play into a growing push in the media and among Western critics to lay blame, not only for the brutality of the military campaign but also for the inadequate international response to the Rakhine crisis.

The figure at the heart of international criticism has been Suu Kyi herself, despite the fact that as de facto leader, she has no authority to restrain or command the military, which holds veto power over constitutional changes and controls all security-related matters in Myanmar. Missing from much of the international response has been criticism of the military commander-in-chief, Senior Gen. Min Aung Hlaing, who has been directing the ferocious military campaign and has repeatedly stated that Rohingya have no place in Myanmar.

On the international level, however, some veteran Myanmar analysts and diplomats believe that overall responsibility for the U.N.’s perceived failings in Myanmar rests with the previous U.N. Secretary General, Ban Ki-moon, and his special advisor on Myanmar, former U.N. Under Secretary General Vijay Nambiar. Both retired last year. From 2011, when the reformist government of President Thein Sein took power, to their retirement, the focus of the secretary general’s interactions with Myanmar was a narrow aspect of the tortured peace negotiations with ethnic armed groups. Much of Nambiar’s time, according to officials who worked with him, was taken up with attending peace talks, often in remote areas of Myanmar.

Despite waves of sectarian violence in Myanmar, the U.N. under Ban stayed focused on the peace process rather than lobbying the Thein Sein and then Suu Kyi governments to focus more closely on sectarian violence and the ongoing plight of Rohingya Muslims.

One former U.N. official in Myanmar said: “The U.N. for six years could have done anything and everything. The Thein Sein government’s door was wide open. But it chose to work very narrowly on the peace process, and within that 90% on the Kachin conflict, often in secret. To what effect? Now there’s more fighting in Kachin state after five years of U.N. ‘secret diplomacy’ than before.”

The official continued: “It’s important to remember that for the past five to six years the U.N.’s Myanmar policy seemed to be entirely in the hands of Vijay Nambiar and his team.”

The recent criticisms of the incumbent U.N. country chief Lok-Dessallien follow a decision by the U.N. Secretary General’s office — later delayed — to replace her. The shift was confirmed by the U.N. in June as a “rotation” which, according to a U.N. spokesman, had nothing to do with her performance. But an internal U.N. briefing paper for the Secretary General Antonio Guterres, leaked to the BBC, said the U.N. organization in Myanmar had become “glaringly dysfunctional” amid “strong tensions” between various arms of the operation.