{1st Photo Caption: Asian economies could fare better than Europe and the US in 2020 amid the spread of coronavirus. Shopkeepers in Chinese city Wuhan, where the virus originated from reopens on Monday, March 30, 2020. © AP}

BANGKOK — Asian economies could fare better than those of their key trading partners in 2020 amid the COVID-19 pandemic, with a projected growth rate of 1% for emerging Asia and 0% for Asia as a whole. The numbers contrast to the sharp 3% global contraction projected by the International Monetary Fund, according to Changyong Rhee, the IMF’s Asia-Pacific director.

But Rhee warned that all forecasts are uncertain due to countries in the region being at different stages of the pandemic and to the continuing danger of secondary waves of infections.

“There is extreme uncertainty around the global growth forecast,” Rhee said. “Many countries face a multilayered crisis comprising a health shock, domestic economic disruptions, plummeting external demand, capital flow reversals and a collapse in commodity prices. The economic fallout depends on factors that interact in ways that are hard to predict.”

Much of Asia’s near-term future depends on the economic recovery of key trading partners. In the IMF’s latest World Economic Outlook, issued on Tuesday, projections for 2020 growth in Asian countries range from a 6.7% contraction for Thailand to growth of 1.2% for China, 1.9% for India and 2.7% for Vietnam, the highest in emerging Asia.

The Philippines and Indonesia are also expected to stay positive, growing 0.6% and 0.5%, respectively, while Malaysia is projected to contract 1.7%.

In a baseline scenario that assumes the pandemic fades in the second half of 2020 and containment efforts can be gradually unwound, the global economy is projected to grow by 5.8% in 2021 while emerging and developing Asia is expected to rebound to 8.5%, the report says. 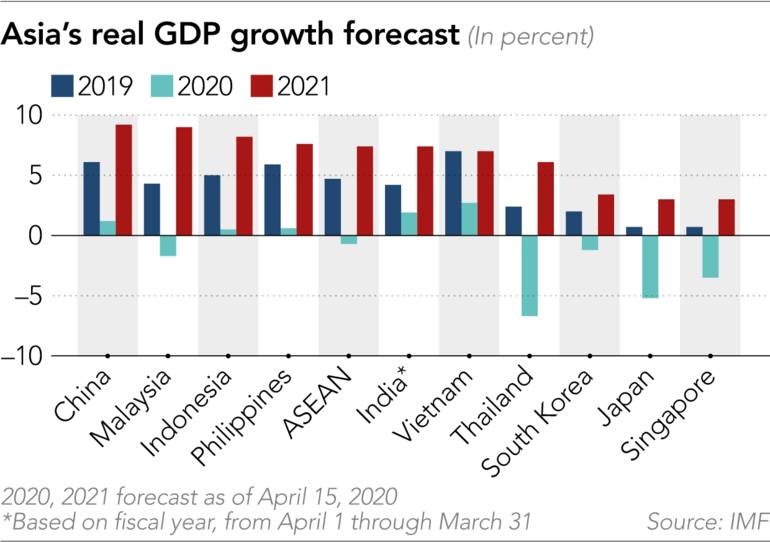 In general, economic forecasts on the impact of COVID-19 tend to differ regarding the depth and duration of the shock, and the pattern of the envisaged recovery, Rhee noted. Beyond projections, much depends on Asia’s key trading partners and how world trade recovers amid concern about rising protectionism.

For 2020, the IMF projects sharp contractions in Asia’s other key trading partners, including the U.S. by 5.9% and the euro area by 7.5%.

“Unlike during the Global Financial Crisis [of 2007-2008], Asia’s real sector, especially the service sector, is being hit hard by pandemic containment measures,” Rhee told the Nikkei Asian Review. “While China’s economy is beginning to get back to work, other economies are imposing tighter lockdowns, and some are experiencing a second wave of virus infections.

“In a nutshell, the impact of the pandemic on the Asia-Pacific region will be severe, across-the-board and unprecedented.”

The projection of 0% growth for Asia in 2020 is a “remarkable downgrade,” Rhee noted. “Asia has not experienced zero growth in the last 60 years.” He pointed out that it managed 4.7% annual average growth rate for the 2007-2008 global financial crisis and 1.3% growth while parts of it were roiled by the 1997 Asian financial crisis.

The IMF’s projections come before many countries reach the peak of the pandemic, which took hold in China in December. While they are broadly in line with global growth projections by the World Bank last week, extreme volatility in global capital markets and a spike in gold prices suggest that investors remain deeply uncertain about forecasts.

Most projections suggest Asia as a whole will be more resilient in the face of the coronavirus compared with hard-hit regions in Europe and the U.S. One reason, according to Rhee, could be early and swift implementations of lockdown by many Asian countries. Scientists are also investigating the theory that populations in warmer climates could be more resistant to the coronavirus, suggesting that Asia may not experience the high fatalities and infection rates seen in Europe and the U.S.

Moreover, since Asia was exposed to the virus before other countries, a recovery may begin earlier, and annual growth in 2021 is expected to rise to 7.6%, Rhee said.

Generally, low oil prices tend to support growth and external sustainability in Asia, where many countries heavily rely on imported oil, although this dependence varies substantially from nation to nation.

But, Rhee warned, “not all lost growth can be made up quickly, and the level of output is likely to remain below the pre-pandemic level throughout 2021.”

In addition, Asia’s ability to recover depends largely on a broader global recovery, he noted, citing a number of factors. Thailand and some other Asian nations rely heavily on tourism. Australia relies on commodity exports. And many Asian nations depend on exports of manufactured goods not only to China but also to Europe and the U.S., which have been particularly hard hit by the virus.

Rhee said the near-term priority for Asia is to control the epidemic and maintain economic systems so that once containment measures are lifted economic activity can quickly bounce back. In this respect, Malaysia has taken the right measures, he said. “It has introduced a Movement Control Order to contain the spread of the epidemic and has allocated more resources to the health sector. At the same time, monetary and fiscal policy has been supportive of aggregate demand. Malaysia is also supporting businesses through a new guarantee fund, increased lending facilities by the central bank, and measures aimed at easing cash flow.”

Thailand, however, faces a significant hit due to its reliance on tourism and exports, even though it has experienced relatively few coronavirus infections. It counted 2,643 cases and 43 fatalities as of Wednesday. “There is a strong contraction in exports,” Rhee said, “led by a large fall in tourism. Exports of goods have contracted because they serve as a part of global value chains, and domestic consumption is weaker, both because of spillovers from weak tourism and the [COVID-19] containment measures.”

While Asia’s overall outlook is not as bleak as other regions, Rhee highlighted the urgent need for financial support, including emergency finance and debt relief for countries struggling to cope with the fallout. So far, 17 countries from across the Asia-Pacific region, of a total of 102, have expressed interest in the IMF’s two emergency financing instruments — the Rapid Credit Facility and the Rapid Financing Instrument, which are not subject to traditional IMF policy conditions and can be disbursed immediately on approval, Rhee said. “We started aiming for $50 billion [in emergency financing], we are now at $100 billion,” he said. “And in one short month our board will have approved half of what is now exceptionally high demand for these resources, after already disbursing for 15 countries in record time.”

In what is likely to develop further into a massive call on the resources of multilateral and sovereign donors and lenders, the pandemic is a “powerful reminder” of the need for policy coordination and solidarity in an interconnected world, he said. “While there has been decisive action on many fronts, many countries still need to scale up policies to match the size of the health and economic challenge, which they only can do effectively with the help of the international community.”

Japan, he said, has been a generous contributor to virus-containment efforts despite facing its own emergency. On April 7, it announced a stimulus package that included a contribution of $100 million to the IMF’s Catastrophe and Containment Relief Trust. The Trust provides debt relief to countries hit by catastrophic events.

So far, fiscal policy packages in Asia’s emerging market economies have been smaller than those of advanced economies, Rhee said. “It may reflect that they are still a few weeks behind the epidemic curve, but it can also reflect their relative lack of fiscal space to do ‘whatever it takes’ and a possible concern about credit ratings and external equilibrium.”

Rhee advised these countries to re-prioritize their expenditures as much as possible and all countries to heed calls for international cooperation. He said the IMF has called on governments to avoid trade restrictions, particularly on medicines and other essential supplies, and to help financially constrained countries with limited health care capacity by providing equipment and medical expertise financed through grants and zero-interest emergency loans.