{1st Photo Caption: A child wears a mask in Thailand slum. The World Bank’s forecast of a “third shock” could devastate economic growth and increase poverty across developing Asia. (Photo by Akira Kodaka)}

BANGKOK — The author of a new World Bank report warned on Tuesday that developing Asia faces the prospect of a “third shock” to follow the trade war and new coronavirus outbreak.

The relentless spread of COVID-19 could devastate economic growth and increase poverty across the region for the first time in a generation, the bank said in a new report on the region’s response to the pandemic.

The shock could cripple the financial sector and capital markets — vital sources of liquidity for reviving industries and other sectors devastated by the impact of the virus — and governments will have to make “extraordinary responses, the report warned.

Aaditya Mattoo, the World Bank’s chief economist for East Asia and the Pacific and lead author of the report, told Nikkei Asian Review that the coronavirus crisis is hitting all countries simultaneously, unlike previous country-specific shocks such as natural and financial disasters.

The report forecasts significant declines in growth across the region in both baseline and “lower” case scenarios.

In developing countries, the World Bank projects annual growth this year to slow to 2.1% in its baseline scenario and to minus 0.5% in a lower case scenario — down from an estimated 5.8% expansion in 2019. 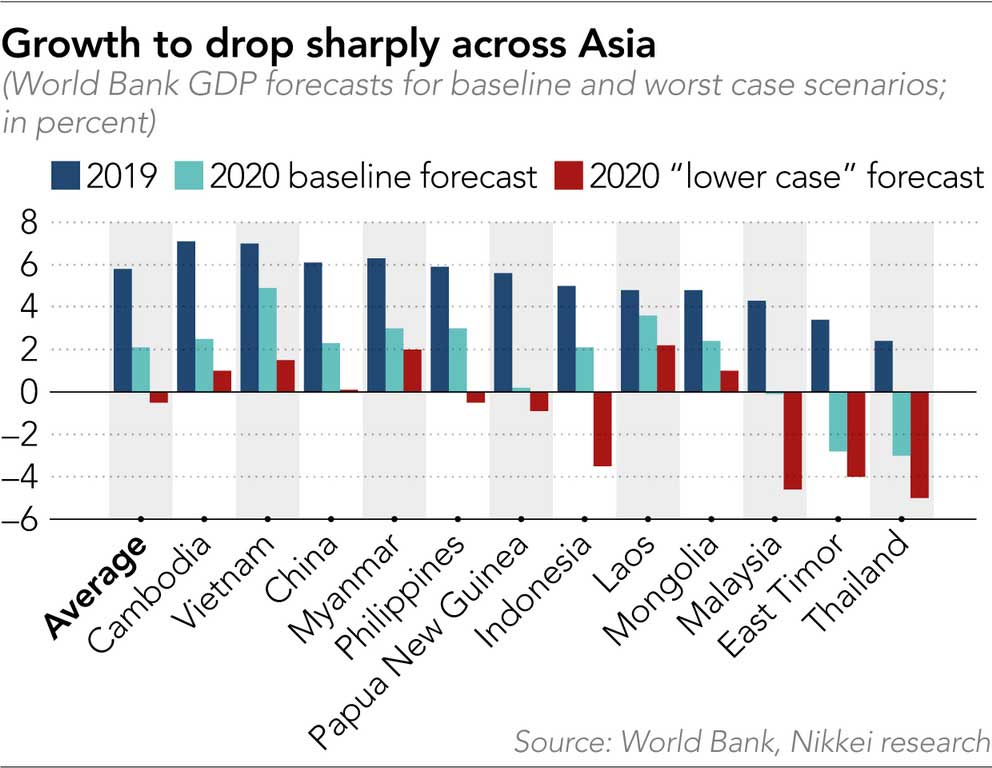 Countries heavily reliant on tourism, trade, remittances and commodities, such as Thailand, where tourism alone accounts for at least 10% of gross domestic product, could contract as much as 5% in the lower case scenario. The prediction is in line with the Bank of Thailand’s recently revised forecast of an annual 5.3% contraction this year.

While containment of the pandemic would open the way for a sustained recovery in the region, risks to the outlook from financial market stress would remain high, and reinforce the “third shock” scenario, the report noted.

Among specific countries, Malaysia, Thailand, East Timor and some of the Pacific Island nations are likely to see varying degrees of contraction — under all scenarios.

The economies of Indonesia, Papua New Guinea and the Philippines are expected to shrink in the lower case scenario, but could see some positive growth in the baseline, although at a much lower rate than in 2019.

Vietnam, Cambodia, Laos, Mongolia and Myanmar, meanwhile, are among the few countries projected to grow no matter what, but at significantly lower levels than last year. 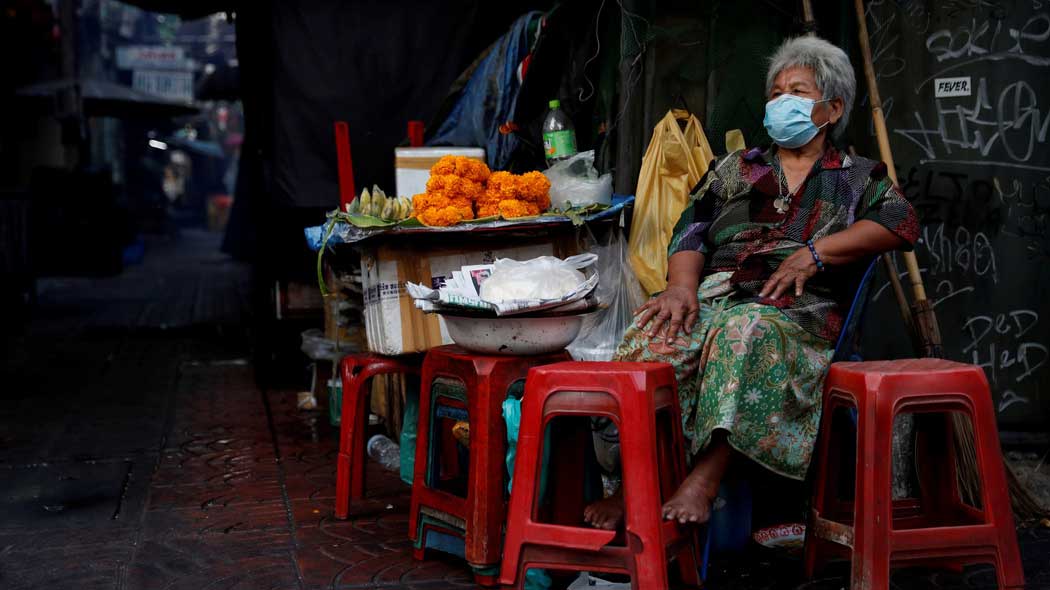 A woman wearing a protective face mask waits for customers Bangkok’s Chinatown on Thursday. The World Bank forecasts a 5% contraction for Thailand this year in a worst-case scenario. © Reuters

For many countries, the biggest shock in the post-virus phase could come from an inevitable drop in external demand, translating into lower exports, decline in tourism revenues, much lower commodity revenues and declines in remittances from migrant workers, it said.

The likely financial shocks will significantly deepen the economic pain, warned the report, though with differing impacts.

China, Vietnam, Malaysia and Thailand, for example, are vulnerable because of their elevated domestic debt levels; Cambodia, Laos, Malaysia, Mongolia and Papua New Guinea, on the other hand, have particularly heavy external debt, while both Malaysia and Thailand also rely heavily on short-term debt.

Among actions that regional governments should consider to address the “third shock,” according to the bank, are urgent investments in national health care capacity along with longer-term preparedness. It also suggests taking an integrated view of containment and macroeconomic policies.

“Targeted fiscal measures — such as subsidies for sick pay and health care — would help with containment and ensure that temporary deprivation does not translate into long-term losses of human capital,” it said.

The report warns that in the lower case scenario the collapse of industries such as tourism and garment manufacturing as well as disruption of the informal sector in the region could drive an additional 11 million people into poverty. Particularly vulnerable are tourism workers in Thailand and garment workers in Cambodia. In the informal sector, the “legal invisibility” of workers makes it hard for governments to help them, it noted.

On the financial front, the report calls for the easing of credit to help household consumption and companies to survive the immediate shock, but warns that expansionary macroeconomic policy “cannot do much to increase production and employment during periods when workers are obliged to stay at home.”

“For poorer countries, debt relief will be essential, so that critical resources can be focused on managing the economic and health impacts of the pandemic,” Mattoo told Nikkei.

In terms of macroeconomic policy, the report cited the need for urgent cash transfers to bolster household spending, along with increased liquidity for companies. Fiscal measures should also support public health responses and provide social protection to cushion against shocks, especially among the most vulnerable sectors, it said.

Looking beyond 2020, the World Bank said: “barring new unexpected shocks and durable financial market stress, the deeper the slowdown, the more rapid the recovery can be expected.”

But the question of exactly when recovery can begin depends, crucially, on when the pandemic is contained — not just within individual countries but also their major trading partners, Mattoo said.