As debate rages, Myanmar ready to license some foreign banks

As debate rages, Myanmar ready to license some foreign banks

YANGON — Myanmar is set to allow the phased entry of foreign banks, amid opposition from domestic financial institutions and parliament that could undermine the new autonomy of the Central Bank of Myanmar, the chief banking regulator.

When a formal notice of expression of interest is issued in the next two weeks, most of the 35 foreign banks with representative offices in Myanmar are expected to apply.

The terms of the tender are likely to specify conditions for branch licenses, to be initially restricted to wholesale services for foreign companies operating in Myanmar. Under the central bank’s most recent proposal, foreign entrants would have just one domestic branch but would be able to conduct wholesale business such as remittances, as well as trade and project finance in both local and foreign currencies.

The applications will be vetted over several weeks by an independent consultancy the government selected in April to prepare and run the tender and short-list applicants.

The International Monetary Fund, which helped to draft the recently implemented central bank law, agreed to advise the central bank on the process after rejecting an earlier request to formally supervise the vetting of applications. 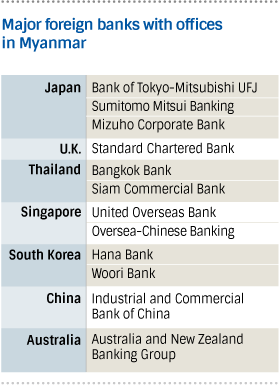 The IMF urged Myanmar to grant only three to five foreign banking licenses, but the central bank may grant as many as 10. Senior government sources said the final number is likely to be six or seven.

Under current central bank thinking, there would be at least three banks from Southeast Asia, most likely from Thailand, Singapore and Malaysia; possibly two Japanese banks; and two Western banks, according to government sources. The only two Western banks represented in Myanmar are the U.K.’s Standard Chartered Bank and Australia’s ANZ Bank.

The consultancy, Roland Berger of Germany, also ran Myanmar’s highly competitive — and widely praised — tender for two telecommunications licenses last year. That contest was won by Telenor of Norway and Ooredoo of Qatar.

Most companies involved in the telecom tender described the process as “transparent” and “reasonably fair.” But the choice of Roland Berger this time is likely to be controversial, given that similar opposition from parliament and local businesses to foreign competition plagued the telecom contest.

The telecom tender saw a fierce struggle in which parliament attempted to wrest authority from the government to award contracts, arguing that foreign companies should be required to have local partners.

The banking conflict is pitting parliament, with elements of domestic banking and business, against the government and central bank. The government repeatedly said Myanmar urgently needs the liquidity and know-how foreign banks can provide. The key arguments concern the pace and format of foreign banks’ entry into a long-closed financial sector.

The debate about foreign banks’ entry has already drawn warnings from influential lawmakers that local industry needs to be safeguarded from foreign competition. And just like the telecom contest when parliament was debating a new telecommunications law, lawmakers are now considering a crucial draft bill — this time on financial institutions. While parliament, under existing law, has no authority over awarding bank licenses, some lawmakers want to insert provisions in the draft law that would give parliament power to determine a foreign bank’s entry.

U Set Aung, a central bank deputy governor, recently told the UMFCCI, Myanmar’s main business body, that the bank would only allow “restricted licenses for foreign banks, meaning foreign banks will not be allowed to offer retail services.” He also said the bank would restrict the number of branches in line with “regionally accepted practices.”

Central bank and other government officials say foreign banks could help strengthen Myanmar’s weak banking sector. “Local banks are in urgent need of technical know-how to build capacity and also of the deeper liquidity base that foreign banks could bring in various forms,” U Set Aung told the Nikkei Asian Review.

Foreign banks cooperating with local banks could play a vital role in providing crucial financial services to big foreign investors, he added. They could, for example, make it easier to extend the kind of project and trade financing that Myanmar’s private sector desperately needs. “Hence,” U Set Aung said, “allowing foreign banks to operate in Myanmar in a form that would not pose a threat to local banks could result in a win-win-win situation, the benefits of which can be shared by foreign banks, local banks and the country as a whole in terms of banking and financial sector development.”

The domestic business and banking community, however, is bitterly divided over the issue. The Myanmar Banks Association, a key industry body, has urged the government to delay the entry of foreign banks. Leading the campaign are strident voices in the country’s increasingly active parliament.

Some lawmakers, including Shwe Mann, the powerful parliamentary speaker, and Aung Thaung, head of the lower house Banks and Financial Development Committee, have been particularly critical of the central bank proposal.

Shwe Mann recently wrote to President Thein Sein, insisting that domestic banks are “not ready” to go up against foreign banks, which he said should be allowed in only when domestic institutions are “ready to compete.”

Drawing parallels with last year’s telecoms tenders, the speaker described the earlier bidding as a “missed opportunity” because the government initiated it before local telecom companies were ready to compete with big foreign providers.

Meanwhile, Aung Thaung, whose family owns one of the smaller domestic banks, United Amara Bank, has repeatedly called for delaying the bank tender, saying the priority of the government, central bank and parliament should be to help Myanmar banks “become more competitive.”

Many smaller banks have highlighted their vulnerability to outside competition. Among the 25 domestic banks, some argue that even if foreign banks are restricted to wholesale operations with foreign clients, they will lose staff and business. Many also claim they will not reap any benefits of technology transfers if foreign banks are not required to partner with local banks.

However, some bigger banks, including Kanbawza Bank, Myanmar’s largest, see the entry of foreign banks as a potential benefit. “Of course, all banks in Myanmar are undergoing a learning process and are eager to receive capacity-building and technical input from foreign partners, either by means of joint ventures or other kinds of cooperation,” U Than Lwin, Kanbawza’s deputy chairman and a member of the presidential advisory council told NAR.

“All domestic banks could be described as undercapitalized,” U Than Lwin said, “and the banking products and services we can offer are very limited. We therefore are in dire need of assistance from foreign partners on both counts.”

But, he stressed, “there is no general consensus among us, although we all agree foreign banks should enter on a step-by-step basis that can help local banks while providing timely assistance to foreign business investors.”

Other big banks remain on the sidelines. U Pe Myint, managing director of CB Bank, Myanmar’s third-largest, recently said he would not be “overly concerned” about foreign banks if they were to be confined to international banking with foreign investors.

There are also surprising signs of support. Some local business executives welcome the greater access to capital and the boost to economic growth foreign banks could bring.

U Hnin Oo, vice president of the Myanmar Fishery Federation, recently told a business meeting that many small companies have trouble securing long-term loans and that foreign banks could potentially help.

“If local banks could provide adequate loans with lower interest rates to businesses,” he said, “we wouldn’t need foreign banks.” Without foreign banks providing more liquidity to the system, small businesses “will hardly be able to progress.”

Some government and central bank officials have quietly hit back at critics. “Some opponents in parliament simply want 100% protection for local banks,” one senior official said. “They don’t want even the slightest competition, which is absolutely no good for the industry or the country.”

On the claim that local banks would be overwhelmed by foreign competition, he added: “Is there any country in Asia where total assets of foreign banks’ surpass those of local banks? To the best of my knowledge, there is none, except Singapore.”

Under existing laws, including the new Central Bank of Myanmar law, the central bank has the sole authority to grant licenses to foreign banks.

But ahead of the parliamentary debate over the revised financial institutions law, to commence in late May, many lawmakers are already insisting parliament should have authority to decide on the entry of foreign banks. Essentially, the issue has become “a race against time,” to see whether parliament can revise the law before the central bank can complete the licensing process for successful foreign banks, according to one official.

That is why, the official explained, “this tender process will move quickly, now that bureaucratic hurdles have been cleared — that is how it looks, for now.”